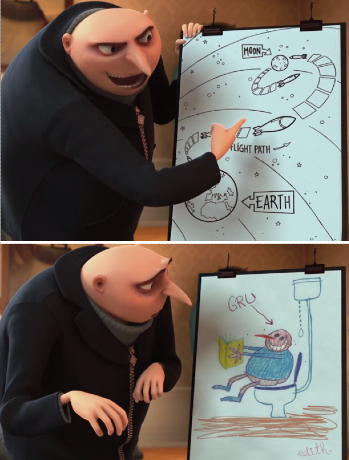 "I fly to the moon. I shrink the moon. I grab the moon.
I sit on the toilet... wait, what?"
Milo: OK, um, the first slide is a creature, a creature so frightening that sailors were said to be driven mad by the mere sight of it!
[cue a picture of Milo at the beach in an old-fashioned swimsuit, wearing flippers and a dragon-floaty]
Comms Officer Packard: Hubba, hubba.
— Atlantis: The Lost Empire
Advertisement:

Someone decides to show off some photographs to a pal. The friend flips through them, and whoops!

Looks like there's an embarrassing photo in there, perhaps revealing that the owner of the photographs "did some things in college he's not proud of"?

An Embarrassing Slide is when a character is showing a series of photographs, a slideshow of a video to a group of people, and an embarrassing picture, slide or piece of footage comes up that they were not intending to share. The image may be embarrassing because of its content, or simply because it is out of place (e.g., vacation photos turning up in the middle of a business presentation).

This is usually played for laughs, but can sometimes reveal tragic Back Story. Sometimes it is shown as a character doing this intentionally as an attempt to be funny.

Expect the phrase "How Did That Get in There?". Bonus points if the character unintentionally sets them up with a description of what they think is in the next slide, a la the page quote.

A Sister Trope to Embarrassing Old Photo, Embarrassing Ad Gig, and Unfortunate Item Swap. Not to be confused with a character embarrassingly slipping or falling, although the slide might show that.