This page contains unmarked spoilers for the first game. Read at your own risk. 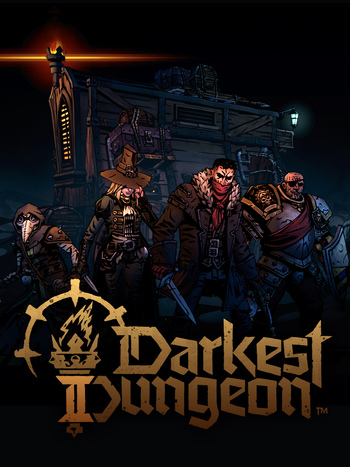 Face Your Failures.
"In the howling darkness of the end... men will become monsters...
...but hope will ride with those courageous enough to carry...
...The Flame!"
—The Academic
Advertisement:

Darkest Dungeon 2 is the sequel to the acclaimed 2016 Gothic Horror Dungeon Crawling RPG Darkest Dungeon, developed by Red Hook Studios. The game is available in early access through the Epic Games Store since Oct. 26, 2021.

You are the protegee and friend of the Academic. One night, the Academic confronts you and informs you that your worst calculations have come. A malevolent eldritch power is affecting the entire earth, driving the population mad, stirring the dead, corrupting the land and its inhabitants, and driving onward hordes of monsters. The Academic gives you the last scraps of Hope, a mere spark which you fit on the Torch at the top of your stagecoach. It is now up to you and your party of four heroes to cross the land in your solid stagecoach and reach the Mountain, the lair and prison of the source of the evil that has cursed the planet, and to slay its occupants.

Darkest Dungeon II's gameplay is noticeably different from its prior installment. Instead of sending parties of heroes to explore one land, the Estate, you now have to assemble one team of four Heroes available in your roster, but this time, you must cross large distances while trying to manage them the best you can the whole way, with few options to change the composition of your team. You must now ride across the land, choose which path is preferable, fight through malevolent humans and monsters alike, scour the monster lairs on the side of the road, and assist the remaining few good people that you come across. The combat system remains a 4v4 Turn-Based Combat with the same health and stress bars, with notable tweaks to it such as an emphasis on special Status Effects, as well as teamwork. The Affliction system has now been abandoned for the Affinity mechanism, as actions in and out of battle affect the relationships between your heroes and these positive or negative relationships will greatly affect how the heroes do in battle.

"A Glimmer of Hope,"

Darkest Dungeon 2‘s tropes... have found you at last!

Ruin…has found you at last!