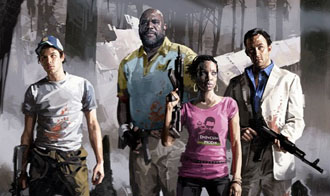 The plot is roughly the same as the previous game: a deadly virus epidemic has claimed the country. You play as one of four survivors trying to make their way though bloodthirsty hordes of mutant infected to reach safety. The difference this time out is the setting is located somewhere around the Louisiana area.

The game sports a few new features such as three new special infected: the self-explanatory Charger, the acid-puking Spitter, and the body-clinging Jockey. Also introduced is the new Scavenge mode, an eight-player mode similar to Versus where the point isn't to reach the safe room; it's to collect gas cans and dump them into a generator, the winner determined by which team can get more into the generator before they're overwhelmed. Also introduced is Realism, where most auras are removed (including the ones around teammates), Witches instantly kill on any difficulty except Easy, there are no "rescue" closets (dead players only respawn at the start of a new level), and a few other things. The narrative to the game has also changed as each campaign now leads into the next one rather than being standalone (for the most part) like the first game did.

The lead up to the game saw much controversy after it was announced at 2009's E3 and was set to be released in November that year, a single year after the release of the first game. Unfortunately, Valve's claim at launch of the original game that they would update it following the model of Team Fortress 2 updates promptly backfired, as large numbers of people were outraged that they were expected to buy content they were under the impression they'd either get for free, or get as a mod rather than an entirely new game; this gave rise to the biggest outburst

of "ruined!" cries ever: a 40,000+ people boycott. A couple months before the sequel was due, Valve flew both leaders of the boycott to Valve's headquarters to playtest the game, where they admitted that it was "well-made". After Valve's release of a new campaign for the original, "Crash Course", and the leaders admitting that the boycott had since become just a general anti-Valve group (most members of which had bought the game they were threatening to boycott anyway), they decided to shut it down.

This was followed by the Left 4 Dead 2 DLC "The Passing", which brings the original survivors and the new ones together (well, three of them anyway) and "The Sacrifice" for both games, which lets players choose who makes the ultimate sacrifice and was preceded by a free comic

. The latter update also made "No Mercy" available in the sequel, complete with the original survivors as the playable characters. Cue rumors that Valve planned to make the entire first game available for free in the sequel (which they did) and more cries of the first game owners being ripped off.

Like the first game, Left 4 Dead 2 is effectively a love-letter to the zombie films of The '70s and '80s, with survivors armed to the teeth giving the Apocalypse a taste of its own medicine.

In 2014, a Japan-only arcade version, using the NESICA arcade board was published by Taito. It features Japanese voice acting, an entirely new cast of survivors, and unlockables including weapon skins, but tones down the violence and gore to the same level as the German version of the original game. It was discontinued in July 2017 where existing functional machines can only play single player or local link multiplayer only. Unlike usual arcade shooting games, the game plays like the base game, with a repurposed Nunchuk and a standard issue PC mouse serving as the controls, and instead of playing with Video-Game Lives, the game is "rented" by having coins buy SVP (Survivor Points), which serves as both time-to-play and additional currency to buy exclusive items.

. Made by prominent modders and community members, it featured a new campaign, added dozens of Survival maps, two new melee weapons (the shovel and pitchfork), rebalanced PVP, improved AI, improved weapon models, new character animations, fully implementing the Counter-Strike weaponsnote Which Valve added to the German version of the game as a sort of apology for having to tone down the gore; they could spawn in the base game, but only if you were playing on a European server or used mods that enabled them., adding weapon skins as rare drop variants of existing weapons, and implementing in previously Dummied Out voice clips.

I Have Not Come This Far...

After a narrow escape into an elevator, the Survivors regroup before facing a massive horde.

I Have Not Come This Far...

After a narrow escape into an elevator, the Survivors regroup before facing a massive horde.