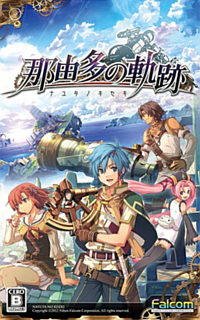 "The world is supposed to be much, much wider..."
Advertisement:

After the success of the Trails in the Sky trilogy and the Crossbell duology, Falcom took a little detour and came out with The Legend of Nayuta: Boundless Trails (那由多の軌跡 - Nayuta no Kiseki; literal translation: "Nayuta's Taken Path"): a "story ARPG" taking the characterization of the Trails Series and combining it with the fast-paced action of their Ys and Zwei games. In order to make the barrier to entry easier for newcomers, Nayuta has no direct story associations with the other games, although it shares some concepts and terminology. It was originally released on the PlayStation Portable in 2012. An updated version for the PlayStation 4 came out in June 2021 in Japan. A localized version is in development, which includes ports to the Nintendo Switch and PC. The PC port was released on December 11th, 2021 on Steam in Japanese while the Switch version was released on May 2022 in Japan, with the port being developed by Falcom themselves with the title Nayuta no Kiseki: Ad Astra* 那由多の軌跡: アド・アストラ, lit. "Nayuta's Taken Path: To the Stars" in Japan. All three versions are slated to come out in the West in 2023 thanks to NIS America. Those who purchased the Steam version will receive the English translation via a free patch.

The Sciencia Sea, a vast ocean dotted with countless tiny islands, is notable for two different peculiar phenomena: "star fragments" which contain images of a beautiful alien world (animals, plants, and rarely buildings no one's ever seen), and "falling ruins" in which ancient buildings fall out of a clear blue sky onto people's heads. (No, really.) Both phenomena are concentrated around Remnant Isle, a tiny settlement built on top of many of these ruins. Nayuta Herschel, student and amateur astronomer, and Signa Alhazen, master swordsman and Nayuta's best friend, are returning to Remnant Isle for a relaxing summer vacation when the biggest ruin yet falls out of the sky.

Nayuta and Signa naturally go check it out and meet Noi, a tiny visitor from another world. Soon enough they meet Creha, a mysterious silver-haired girl sleeping in a coffin-like bed of flowers, and from there Nayuta is plunged into an adventure beyond his greatest imagination.

Like in the other Trails games, story progression is punctuated by subquests in which you help the inhabitants of your hometown and in so doing learn more about them and their world. Features one of Falcom Sound Team JDK's best scores yet and an unexpectedly heartwarming story, even for Trails.