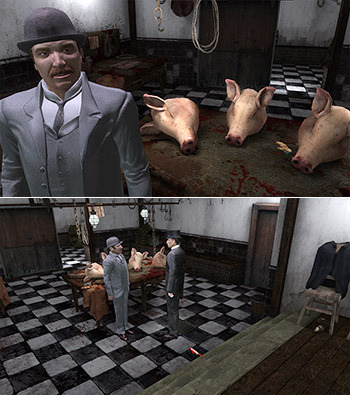 This is a gaming trope where the player's perspective will change between views, such as switching from first person perspective to third person. In some games, the player has the option of switching between these views at their whim; some third person games actually have a designated button for switching to first person, usually to get a better look at something, since third person view doesn't always give a good view of details or faraway things.

Other games handle this dynamically, without player input, depending what action the player is taking. For example, a game that's normally first person might temporarily switch into third person view as the player climbs into a vehicle, and is likely to stay there for the rest of a vehicular section. Alternatively, a game that's usually in third person perspective might switch into first person mode as your character uses binoculars or a scoped weapon.

This is very common in racing games (in fact, most driving games will have a button specifically dedicated to switching between several different views), so don't include any examples from that genre unless it's particularly different than the usual convention.

Not to be confused with Switching P.O.V., a plot trope where a story switches between protagonists/narrators.