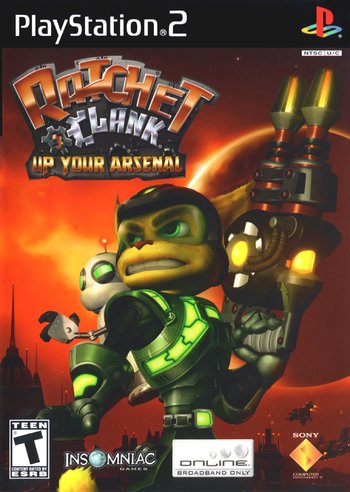 This time, the destruction is personal.
"Robotic citizens of the Solana Galaxy... the hour of your liberation IS AT HAND! Too long have we robots SUFFERED under the bigotry, the stupidity, the SQUISHINESS and foul stench... of organic life forms! Soon, all robots will bask in the liberty... and equality... of my benevolent, iron-fisted rule! And... as for you filthy organic life forms... YOU can look forward to BEING DISINTEGRATED! MWAHAHAHAHAHAHAHAHAHA! That is all for now."
—Dr. Nefarious' message to the galaxy, with his butler Lawrence providing sign-language interpretation
Advertisement:

The third game in the Ratchet & Clank series, and the first to include multiplayer modes.

Ratchet and Clank have put an end to the Protopet plot in the Bogon Galaxy and are enjoying their newfound downtime, but unsurprisingly, it doesn't last, as they learn that Ratchet's home planet Veldin is under attack by a new villain known as Dr. Nefarious, a Mad Scientist and robot supremacist who also happens to be a former foe of Captain Qwark. Ratchet's unwilling to allow his homeworld to come to destruction, and the two heroes promptly return to the Solana Galaxy to stop the attack. Upon learning of Qwark's history with Dr. Nefarious, they reluctantly track down and team up with the disgraced superhero in order to thwart the doctor's scheme to turn everyone in the galaxy into his robotic slaves.

This goes out to all you tropers 'cross the galaxy...

Example of:
Girl of the Week