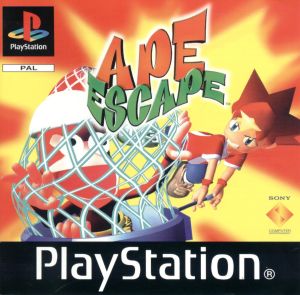 Your job is to catch some monkeys. Here's a net. Go bananas.
Ape Escape is a series of 3D Collect-A-Thon Platform Games. It is known as Saru! Get You! in Japan.
Advertisement:

All three main games are about an evil monkey named Specter who suddenly gains super-intelligence through a hapless professor's intelligence-increasing helmet, who proceeds to put said helmets on every other monkey in a monkey enclosure and teleport them all over the place. Your character's task is to... well, catch them all.

The series has two main gimmicks. The first is that you have a huge variety of gadgets and gizmos at your disposal, all of which are activated and controlled using the right analog stick. Instead of using the face buttons to jump and interact with the environment, the buttons are instead used to equip multiple gadgets at once, and the triggers are used for jumping instead. This gives the series a unique feel, as each gadget interacts with the right stick in a unique way—you can swing the Net vertically or horizontally for instance, while the Monkey Radar needs to be rotated in a circle in order to locate the nearest monkey. The second are the titular monkeys, which act as this game's Stars or Jiggies. Unlike those two games, the monkeys in this game are fully sentient enemies, and will actually run away if you approach. There are also numerous types of monkeys, each of which has a different type of behavior. Some will run, but others will stay and fight, while others might choose to pilot vehicles to escape from you, and so on. Often, the challenge is less based around finding the monkeys, and more about putting them into situations where they become easily catchable, meaning the series has more of a puzzle bent to it than its contemporaries.

Your characters change from game to game, starting with a guy named Spike/Kakeru, then going to a kid named Jimmy/Hikaru, then your choice of two characters Kei and Yumi (NA)/Satoru and Sayaka (PAL) in 3, and a nameless Heroic Mime in the PlayStation Move game. Also, starting from Ape Escape 2, the game's Quirky Miniboss Squad, the Freaky Monkey Five, shows up, monkeys that have been fed the power-boosting Vita-Z Banana, making them go completely insane.

Spike appeared as a playable character in PlayStation All-Stars Battle Royale in his Million Monkeys attire, albeit with a more Westernized look.