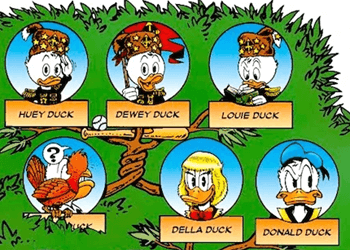 This should answer where Huey, Dewey, and Louie came from... but then, just who is their dad?
"Yeah, I've got three nephews, too... at least that I know of."
— Mickey Mouse to Donald Duck in this

◊ Mother Goose and Grimm strip (actually, Mickey has TWO nephews... at least that we know of)
Advertisement:

Many cartoon characters intended for children, especially the "iconic" ones, always seem to be surrounded by kids when the plot calls for it. These children are never their own, however, but the offspring of a brother or sister of the main character we never get to see. For whatever reason, they also tend to be the result of multiple births.

It's common for main characters in a cartoon series to be unmarried. This allows for plots to involve things like dating, but since Status Quo Is God, they probably won't ever stay with any partner for very long, let alone get married. And since these are generally kids' shows we're talking about, no marriage means they'll never have children.

Thus, nephews and/or nieces become the safest way to integrate young family members into a children's show. The main character's romantic life can remain unburdened for plot purposes, and they can spend a lot of time hanging around kids without inspiring audience worry that anything untoward is going on. Unseen aunts and uncles also mean that when the plot calls for the main character to go off on some adventure where having a kid in tow would hinder the plot, the kids can disappear for a while without anyone asking who's watching them.

Also works as a reverse Parental Bonus. Single characters can be easily placed in risqué situations that imply they are less than fully chaste, as well as Ship Tease moments. Good thing the kids are too stupid to notice those.

Note that kids who are (at least implicitly) the biological children of single main characters aren't unheard of — it's just that the precise circumstances of their family situation will never be addressed, never mind the fact that pantsless cartoon characters have no apparent reproductive organs. Occasionally, characters will even have sons or daughters running around completely out of nowhere, with no effort whatsoever given to explaining who the parents were.

Note: The concept of an uncle at least looking after a child is an old tradition: if a parent died, the uncle would become the foster father (and in many cases marry the mother). For instance: The Lord of the Ringsnote Technically, Bilbo was Frodo's first and second cousin once removed, but for simplicity, and due to their 78-year age difference, they call each other "Uncle" or "nephew". Harry Potter, Spider-Man, Star Wars, etc. In some cultures, (such as the ludicrously-often-used-for-examples Trobriand Islanders), the uncle is the "standard" parent while fathers have very little to do with raising their biological children (they're busy raising their sister's children instead, obviously).

For the non-animated version, where the absence of parents is most likely part of the plot, see Nephewism.