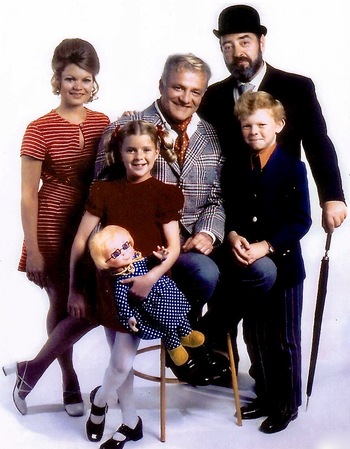 Family Affair was a 1966–71 CBS Dom Com about three children named Cissy, Jody, and Buffy, who — having lost their parents to a car accident — went to live with their bachelor uncle Bill Davis (Brian Keith) and his British manservant Mr. French (Sebastian Cabot) in a swanky Manhattan apartment.

Today, the show is mostly remembered for both its creator-producer Don Fedderson and the network insisting that the character of Buffy should remain a young, prepubescent child, even as actress Anissa Jones entered puberty and got closer and closer to high school.

A revival of the series, starring Gary Cole as Uncle Bill and Tim Curry as Mr. French, aired on The WB during the 2002 season.

The 2002 revival series provides examples of: