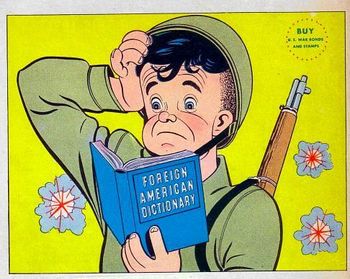 Ah, the two languages: American and Foreign.
"Son, my digitized consciousness will now teach you science, mathematics, and Earth facts for the duration of your journey. Of course without any stimuli other than my voice, there's no way for you learn what any of these words mean, so prepare for three years' worth of indecipherable blathering I guess."
— Marlon Brando (talking to baby Kal-El on the spaceship), The Editing Room's abridged script for Superman: The Movie
Advertisement:

There are a whole lot of science-related inaccuracies in fiction, with some fields of knowledge bearing the brunt worse than others. In the case of linguistics, the vast majority of people have no idea it exists, never mind the basics. Obviously, this includes writers. Indeed, the prevalence of this trope (and its relative lack of being noticed) can be attributed to this fact - most people recognize that when dealing with questions of physics, biology, chemistry, etc., they need to ask an expert, whereas with linguistics, many people don't even realize that there are experts to be asked.

Many language/linguistics tropes are attributable to this, and are split up here into errors in academic linguistics, translation errors, and errors in usage.

open/close all folders
Author's Mistakes (General):
Basic mistakes in the way languages work, evolve, and differ from each other.
Author's Mistakes (Translation tropes):
Examples of these tropes ignore the differences between languages and assume they all translate perfectly 1:1. And then they get the translation wrong.
Mistakes with Usage:
Many people assume "linguistics" to be all about correcting spelling, pronunciation and grammar "errors". In fact there is no such thing as objectively correct usage,note True as far as it goes, but there is a recognized difference between descriptive and prescriptive linguistics with widely differing aims. Good rule of thumb is linguistics as a science is by nature descriptive. as languages evolve over time - linguists concern themselves with studying actual usage, warts and all, rather than trying to be a Grammar Nazi. The following tropes are not strictly linguistics failures, simply poor usage:
Advertisement:
Audience's Misconceptions (Linguistic Dissonance)
While not made up of mistakes in itself, these tropes can cause difficulty with audiences who are unaware of the difference within languages over time and from place to place: