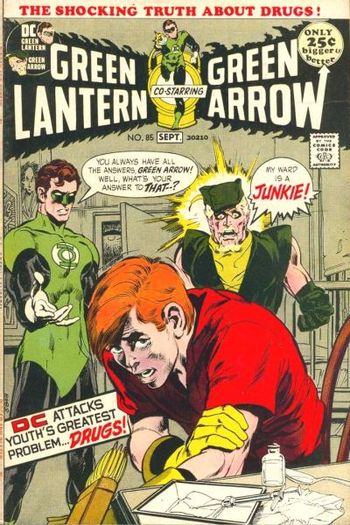 His nickname is "Speedy!" What did you expect?!
"We'd be watching Saved by the Bell, we'd be having a great old time. And then suddenly, a character we had not seen before would show up with some weed, and the episode would stop cold in its tracks!"
— John Mulaney during a segment on marijuana, The Comeback Kid
Advertisement:

Tonight, on a very special article of TV Tropes ...

An episode, often in a sitcom, in which the lead confronts some highly emotional or forbidden issue from everyday life. Drug abuse, eating disorders, and worse... TEENAGERS HAVING SEX! At the end of the episode, the protagonist is Enlightened, and the guest character with the Very Special Problem is never seen or heard from again. Often there is an 800 number to call, should you (or someone you love) actually have the Very Special Problem. Another key criterion is that side-effects, complications, or failure-rates of the official government-mandated Very Special Solution the episode promotes are never mentioned. If the problem involves children in some way (and it almost invariably will), then it may also be promoted as something that "No Parent Should Miss". These often come about when networks or writers are bucking for awards, or may be caused by Writer on Board.

The tone will typically be much, much more serious than other installments of the series, although with sitcoms, there may still be a comedic subplot or occasional moments where the Laugh Track is needed. If Status Quo Is God is in effect, there is only a small chance of breaking with this practice, but that's the reason for the common tactic of introducing a new guest character who isn't protected by this consideration, and can therefore have anything bad or good happen to him without changing the status quo.

Or, in other words: OOC Is Serious Business for television shows.

These episodes were far more common in the 1980s, fueled by then-United States president Ronald Reagan's crackdown on drug use in America. They've largely fallen out of favor since then for most shows, due in part to the increasing number of shows, particularly dramas, where issues such as drug/alcohol abuse, violence, sex and death are dealt with on an almost weekly basis, and then you have the Dramedy genre that regularly mixes comedy with serious issues.

There's a certain variety of shows where essentially every episode has a special message, such as Touched by an Angel, Joan of Arcadia, etc. However, it's not by any means a Dead Horse Trope yet due to Police Procedurals (i.e. Police Stop!, Police, Camera, Action!, Road Wars) and law enforcement dramas like Criminal Minds and Medium. Medical dramas will also do these, but for ethical not medical issues.

It is also a very ripe target for parody; these days, parodies are probably as common as seeing this trope played straight. May also be vulnerable to Détournement.

Compare Public Service Announcement. Too Smart for Strangers (about the danger of child abduction), Drugs Are Bad (about Just Saying No to them), and Anti-Alcohol Aesop (drinking is bad for you) are two specific kinds of Very Special Episodes that reached their zenith in the 1980s. Descent into Addiction is a special case of the latter trope, in which the episode is all about a character's gradual slide into addictive behaviour. See Compressed Vice for when a character is saddled with an issue for just long enough to illustrate the aesop, and Long-Lost Uncle Aesop for when a new character is introduced solely for this purpose and never seen again. An Author Tract is when the entire work is used as an excuse to preach about a particular real world issue. Green Aesop is when the story focuses on environmental issues, but these aren't as common. Can also double as a Prejudice Aesop.