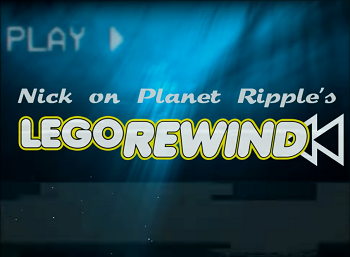 Greetings, everyone, and welcome to LEGO Rewind, where we take another look at old retired LEGO themes!
"Hey guys, today I want to try out something new, as a side thing to go along with my game reviews: welcome to Nick on Aqua Magna's LEGO Rewind. Despite whatever impressions including "Aqua Magna" in my username might give people, BIONICLE is not the only LEGO theme I like, and I felt like showing my appreciation for a few of LEGO's many other themes, the ones that have really clicked with me. Some of these will be themes I collected while others will be before my time that I later discovered and wanted to introduce the next generation to."
Advertisement:

LEGO Rewind is a series of YouTube videos by graphic novelist and video game reviewer Nicholas Anderson (username "Nick on Planet Ripple", formerly "Nick on Aqua Magna"). As something of a Video Review Show mixed with a guerrilla Documentary series, Nick reviews various LEGO themes, specifically (but not exclusively) focusing on retired cult classics (as well as any spiritual successors) analyzing their concepts, design elements, story, and impact on LEGO's history and fandom.

LEGO Rewind originally ran from August 2017 to December 2019. The original run series is divided into three 13-episode seasons, with the season finales recapping his thoughts on prior episodes as well as correcting any errors or missed details. In addition, there's also a series of annual year in review episodes about various LEGO developments. Nick has also stated that he's open to the idea of a full-fledged fourth season should inspiration strike, and it appears it did just that, as he eventually launched a Patreon page

to fund his entire body of work, with the highest-tier reward being a LEGO Rewind episode devoted to the theme of the Patron's choice.

The complete series is on this playlist

Themes and subjects covered:
Note: Subjects marked with a caret (^) are or will be covered in greater detail in a later episode

Well, that's it for today. If you want to support my work, please check out my graphic novel series Planet Ripple. You can buy the books on

Amazon or read an early draft of the first book for free!

And for the BIONICLE fans in my audience, there's The Toa, my ultimate love letter to the original series.

Links to everything in the description. Up next, it's something a little less likely to ruin anyone's lives. Toodles!