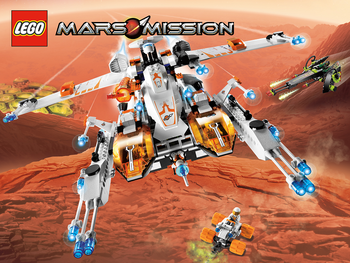 LEGO Mars Mission is a LEGO Theme beginning in 2007 and concluding in 2008, revolving around a team of miners and explorers on Mars who are suddenly forced to militarize in the face of an alien threat.
Advertisement:

The astros of Earth Command travel to Mars to explore the red planet and mine for Power Crystals. Although the Red Planet appears barren at first, they soon come in contact with hostile alien lifeforms attacking their personnel and vehicles. To defend themselves, the astros quickly militarize, turning their mining vehicles into battle tanks. As the war continues, the astros eventually discover the Alien Hive. However, when the Alien Commander emerges to lead his troops.

The story of Mars Mission was largely documented through the online Real-Time Strategy game CrystAlien Conflict, in which the player had the option of playing as either the astros or the aliens. In 2009, Mars Mission was featured prominently in the Nintendo DS game LEGO Battles, where again the player could play separate campaigns for Earth Command and the aliens.

LEGO Mars Mission is often considered a Spiritual Successor to LEGO Life on Mars, the last LEGO Space theme since LEGO acquired the Star Wars license. Whereas Life on Mars was notable for showing peaceful relations between the human astronauts and native Martians, Mars Mission started the trend (to be followed by LEGO Space Police, LEGO Alien Conquest, and more) of heroic humans battling evil aliens.