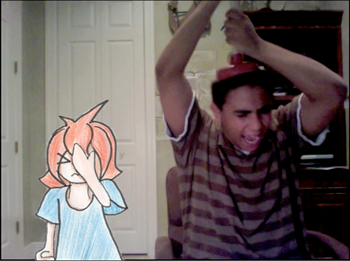 A toon and a human walk into a bar...
"Hello and welcome to Lenny and Shinko's Disney-See, or, LSD for short! I'm Lenny..."
"And I'm Shinko!"
Advertisement:

. Starring a human named Lenny, and a cartoon girl named Shinko. Other characters appearing on the show range from the unseen Blue Fairy, Oswald the Lucky Rabbit, and a newer character, Sinko.

The show's reviewing scope focuses specifically and only on Disney in any media form (though Lenny has stated that they are open to trying something non-Disney).

In addition to reviews, there are small 'Shinko Shorts' released in-between reviews. A Story Arc involving an Alternate Universe popped up, and the show returned after an unexpected hiatus.