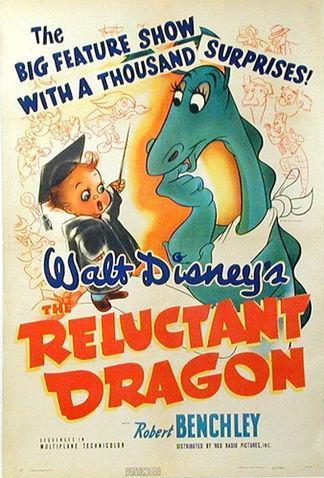 The Reluctant Dragon is a 1941 film by Walt Disney Pictures. While much of the film was shot with live footage, the film takes a behind-the-scenes look at how Disney makes their cartoons, via a tour around their then-newly built Burbank studio, and several animated segments are graciously scattered throughout.

The plot of the film is centered on humorist Robert Benchley, whose wife hectors him into visiting the Disney studio to try to pitch an adaptation of the Kenneth Grahame book "The Reluctant Dragon". The film then shows him going through several parts of the studio, including the life drawing class, a live recording of Donald Duck and Clara Cluck's voice actors (singing an Opera—in character, no less!), a sound stage working on a short centered on a proto-Casey Jr., the camera department (where the film makes a jarring switch to full blown technicolor) where we get a look at the famous Multiplane Camera (as well as a cameo appearance by Donald Duck), a trip through the ink-and-paint department (where we get a cameo of Bambi), the maquette department, a storyboard session (where we are presented the story of "Baby Weems", which is a very intriguing experiment in Limited Animation), an animators' room (with appearances by Ward Kimball, Fred Moore and Norm Ferguson) where we are presented an all-new Goofy cartoon short ("How to Ride a Horse"), and finally a screening room, where Benchley meets Walt Disney himself and is treated to the presentation of an animated short based on... "The Reluctant Dragon"!

The film was made for the purpose of economics. Due to the financial failures of Pinocchio and Fantasia, Walt needed a way to make some quick cash, and realizing how popular one of his previous documentaries centered on making cartoons was, he decided to make a film that delves very deep into the making of his studio's works. The film was also made as a way of getting good publicity for the studio during the rise of the disastrous 1941 studio strike. Unfortunately, it didn't work. Critics were strongly disappointed that the film was not another animated feature but rather a collection of shorts and scathed it as a "cheater film" — the fact that the aforementioned strike undermined the way the film presented the studio didn't help. As such, the film flopped badly, failing to make up even its budget of US$600,000. Watched today, in its proper context, it's a very interesting, and humorous film.

The actual "Reluctant Dragon" short from the end has sometimes been re-released as its own standalone subject or packaged with another short, but the entire, unabridged film is available as a bonus feature on the Blu-Ray bundle of The Adventures of Ichabod and Mr. Toad and Fun and Fancy Free, and for digital download and streaming. The characters of the Dragon and Sir Giles would later make "blink and you'll miss 'em" cameos in the film Who Framed Roger Rabbit.

No relation to Pete's Dragon, by the way.

The Reluctant Dragon provides examples of: