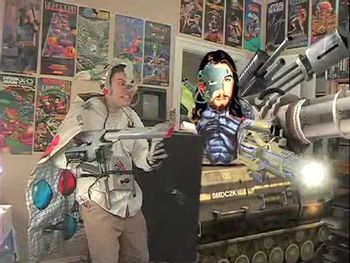 After reviewing Super Mario Bros. 3, the Nerd and Super Mega Ultra Death Christ fight Satan spawned from a game cartridge.
"Well, time for a review. Ha! Just kidding! No, it's time for a boring sketch with our interns! What, you didn't think we actually reviewed games anymore, did you?"
— VG Cats, "G-four'd

So you're a Caustic Critic with your own Video Review Show hosted on your website, and you have a somewhat sizeable fanbase to your name, with thousands of viewers pouring in on your website to watch you shout a lot about games, movies or television shows both new and old and why they all suck so bad. That's all well and good, but you could still go that extra mile to grab some extra viewers, while flaunting your filmmaking skills over the course of a standard review.

This is the Mid-Review Sketch Show: a series of usually short cutaways from the actual review for the reviewer (with a possible host of extras by his side) to perform additional, usually humorous skits relating to the work being reviewed, and often to showcase the creator's opinion of the work being reviewed in a more visual format. Depending on the reviewer, these can be either very subtle or massively elaborate, with some reviewers taking weeks to script, film and edit their videos into twenty-minute-extravaganzas.