Not Screened for Critics 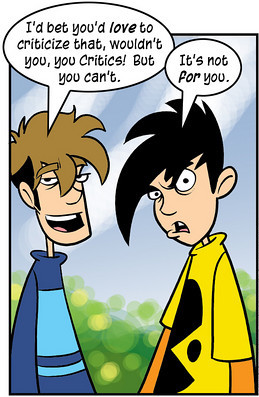 "We'd love to tell you more about this one, but it doesn't screen for critics until later in the week, which is never a good sign."
— Rotten Tomatoes, on the quality

So it's Friday, and you're considering seeing this new movie that has just Opened In Theaters Everywhere. Before you do, you grab a copy of today's newspaper, and turn to the movie section, looking for a review. Or, in this day and age, you check a site like Rotten Tomatoes or Metacritic to get both their combined metascore and the reviews that come with it.

With a newspaper, you read a notice stating that the film was "not screened for critics." Online, the review compilation sites have very few reviews, too few to compute a review score. This is almost always a big warning sign about the quality of the movie. For the vast majority of movies that do this, it's because the studio doesn't want critics to warn people away from the movie prior to opening day.

Another tactic by studios is to allow critics to see a preview screening... with a bunch of contest winners, so that instead of being able to make notes and review a film in a quiet theater or purpose-built screening room, the critic has to do it in a crowded megaplex with people who probably wouldn't have seen the movie at all if they hadn't won free tickets and will probably like it only because they didn't have to pay to see it. Films aimed at kids and teenagers might get a rowdy and rambunctious audience throughout the entire film (worse if it features the Teen Idol of the moment). One of the actors or producers may even make a "surprise" personal appearance, taking away any sense of a neutral setting. (Are you going to tell them their film is awful in person?) Many critics thus will easily not take the bait and stay away in droves for their sanity.

This tends to happen a lot during the months of January, February, and late August — the traditional Dump Months where all the movies in which the studio has no faith but which it is contractually obligated to release get dumped, leaving the good months for Summer Blockbusters and Oscar Bait.

In the video game world, most prominent review outlets tend to get copies of games early, and it's telling what the publisher thinks of a game if a website like IGN or Gamespot have to purchase the game themselves on release day. Happens less with big budget games, since they are often cushioned by months of positive preview coveragenote Negative preview coverage is rarer in video games because publishers have more methods of controlling the message than movies do, due to the difference in mediums that have convinced many to preorder the game before reviews are even a factor.

Television is also an area where this occurs — preview DVDs (formerly tapes) are sent to reviewers so they can write their reviews. Where this does not occur, it is for three reasons:

The number of preview DVDs being sent out is also slowly decreasing overall, as studios have finally realized where all those pre-theatrical-release DVD rips of blockbusters floating around the internet actually come from. However, this doesn't mean previews stop being sent altogether, just that fewer reviewers are trusted with copies. TV networks also screen their programs over the internet on password-protected sites for critics, although this can also be discouraging (any television critic can tell you that they'd rather do anything else than watch a program on the infamously glitchy ABC MediaNet site).

Of course, on the other hand, small press, indie and underground works usually don't send out review copies, as they tend to be much less concerned with promotion or mainstream opinion, and most big name news sources are uninterested in reviewing obscure works anyway.

Compare It's Not Supposed to Win Oscars.