Tainted by the Preview 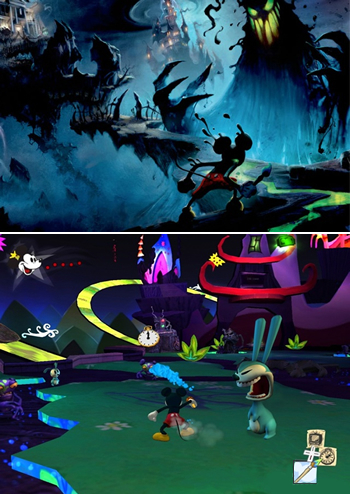 Above: EPIC Mickey!
Below: Eh-pic Mickey.
"Now, as with most arcade games of the time, a conversion to the home computer formats was almost inevitable. 'Hurray!' we thought! 'We can play Street Fighter at home!' Then we were told that it was going to be converted by Tiertex. There were no more hurrays..."
— Stuart Ashen, review

Sometimes, hyping your project in advance is a double-edged sword. In the best-case scenario, you get people excited about the things that will be in your upcoming movie/show/game/media extravaganza, and early ads will build interest for when the work finally comes out, and then there are the cases where the advance word results in a large amount of complaining. Tainted by the Preview covers all those instances where the would-be audience for something yet to come out immediately decides it detests something about it, based on a preview, and starts complaining about it. Vociferously.

While this can happen with brand-new projects, this most often happens with older series with established fanbases. A series with a Broken Base is nearly guaranteed to have some portion react this way; a previously-united fanbase might become one if this reaction isn't universal. Of course, it's always possible that this reaction will be universal whether or not the base is broken; the project can be in real trouble if that's the case.

Of course, there's always the possibility that the preview itself just wasn't very well constructed and failed to show the work to its best advantage.

This is a specific, pre-release version of They Changed It, Now It Sucks!

Fortunately, it's comparatively easy for anything getting this reaction to be Rescued from the Scrappy Heap — all it has to do is be better than people expected (which, given how low the expectations tend to be, not that difficult). Unfortunately, it's not uncommon for the first impression to be the right one.

Contrast And the Fandom Rejoiced - although this reaction can follow that one - and And You Thought It Would Fail.