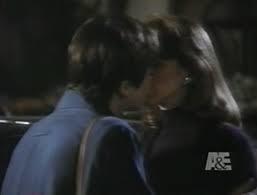 The original Trope Namers C.J and Abby from L.A. Law
"Melrose Place is coming back this fall, and it has resorted to TV's tried-and-true marketing tactic - The Homo Promo."
— That's Gay: Lady Kisses

The gossip columns go crazy. Interviews with the glamorous starlets are scheduled, and they say things like, "well, I love men, but women have such soft lips and are such great kissers... there's really nothing like it!"

Commercials announce that your favorite good, wholesome man-loving female character is about to take a walk on the wild side. The ad spots will inevitably show the two ladies facing each other, lips pursed, faces nearing, only to cut away before the good stuff happens.

Well, it must be Sweeps.

This is an Always Female variation on Tonight, Someone Kisses where a straight or bi female character kisses another woman (usually a tertiary character or one-episode guest star). The long-term implications are generally negligible and the female regular characters remain straight. The non-regular's remaining screentime in the series will generally be measured in minutes rather than hours or seasons. This is all assuming, of course, that the whole thing isn't taken entirely out of context, and the footage taken from an Accidental Kiss, Fakeout Makeout or, worse, Imagine Spot.

Often classified as fanservice, this is mostly just a Ratings Stunt, calculated to get more viewers while creating a manageable amount of blowback from the Moral Guardians, who, while generally disapproving of lesbianism, have a sufficient Double Standard concerning depictions of male and female homosexuality that they generally save their outrage for, you know, serious dangers to society, like Dogma or Brokeback Mountain...

There's one other explanation for the lack of outrage over the most recent Sweeps Saphistry, and that's that people are losing interest in women making out in prime time. Since the mid-2000s, the lesbian sweeps kiss seems to be getting increasingly diminishing returns in the ratings. The LGBT community is no longer desperate for whatever non-negative representation they can get, and critics are no longer impressed by a showrunner's "bravery" by including it. Further, when you can see far more bizarre things on YouTube (to say nothing of other corners of the Web), and far more extreme or daring things on non-network television, the Sweeps Week Lesbian Kiss is clearly in danger of becoming a Discredited Trope.