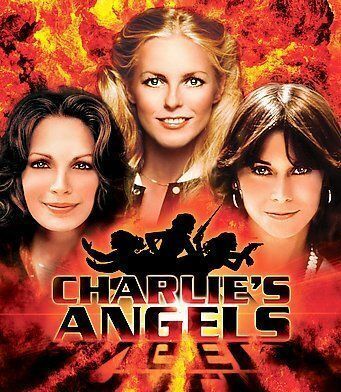 Once upon a time, there were three little girls who went to the Police Academy; and they were each assigned "very hazardous" duties.
But I took them away from all that, and now they work for me. My name is Charlie.
Advertisement:

1976-1981 ABC TV series produced by Aaron Spelling about three female private eyes, who would receive their briefings from The Voice, "Charlie". It was later remade as a short-lived 2011 series with the same theme (there was also an aborted attempt at a remake in the early 1990s, but sans Charlie).

Three women, the Angels (originally Kate Jackson, the late Farrah Fawcett-Majors, and Jaclyn Smith), graduated from the Los Angeles police academy only to be assigned such duties as handling switchboards, writing parking tickets and directing traffic. They quit and were hired to work for the Charles Townsend Agency as private investigators. Their boss, Charlie (voiced by John Forsythe), is never seen full face (in some episodes the viewer gets to see the back of his head and his arms, talking through a phone while surrounded by beautiful women) assigning cases to the Angels and his liaison, Bosley (played by David Doyle), via a speaker phone.

Charlie's Angels is episodic in nature, as opposed to serial, thus each episode shows the Angels finding themselves in new situations in which they would go undercover to investigate. The undercover aspect of the show creates much of the plot interest and tension. In the early seasons of the show, the Angels, under their assumed identities, use a combination of sexual wiles and knowledge learned for the situation in which they are being placed, but by the third and fourth seasons, the writing has a tendency to stray from the sex appeal and focus more on the case at hand. The fact that those women changed so often is purely irrelevant.

The series is remembered today both for being one of the first action series with strong female heroines, and for the prominent fanservice.

A shortlived revival of the television show starring Minka Kelly, Annie Ilonzeh, and Rachael Taylor aired in 2011. The show also spawned two feature films in the early 2000s that were implied to share some continuity with the original TV series (and with Jaclyn Smith from the original series making a cameo in one), and one that premiered in November 2019 starring Naomi Scott, Kristen Stewart, and Ella Balinska as the titular trio, with Elizabeth Banks directing, producing and playing Bosley.