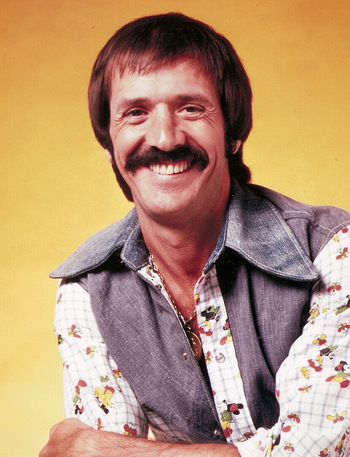 "Don't cling to fame. You're just borrowing it. It's like money. You're going to die, and somebody else is going to get it."
Advertisement:

Salvatore Phillip "Sonny" Bono (February 16, 1935 – January 5, 1998) was an American recording artist, producer, and politician who came to fame while married to Cher for many years; much of her famous work was duets with him as the popular singing duo Sonny & Cher. After they divorced, she kept making music, he went into politics. He was mayor of Palm Springs, California, from 1988 to 1992, and representative for California's 44th district from 1995 until his death in 1998.

Bono is greatly disliked by anyone who hates copyright, as his big achievement before his death was the Copyright Term Extension Act, giving 20 years extra to all copyrights, and is now commonly known as the Sonny Bono Act. Many scholars have said this was the most naked act of corporate greed in U.S. history, and the alternative name for his copyright act is the Mickey Mouse Protection Act. He died in 1998 in a skiing accident.