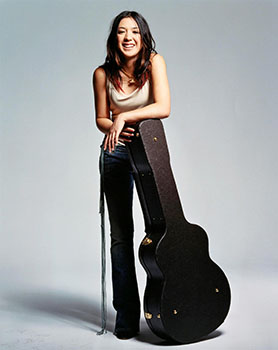 Makin' Loud Music
Cause you're everywhere to me
And when I close my eyes it's you I see
You're everything I know that makes me believe
I'm not alone
I'm not alone
—"Everywhere"
Advertisement:

Michelle Jacquet Desevren Branch (born July 2, 1983) is an American singer-songwriter and guitarist, often cited as the Ur-Example of the "anti-Britney" movement in the early 2000s, in which female pop music took a decidedly less artificial turn towards auteurist adult contemporary. In the beginning of the decade, she released two top-selling albums, The Spirit Room and Hotel Paper, and was subsequently nominated for the Grammy Award for Best New Artist in 2003. In 2005, she formed the country music duo The Wreckers with friend and fellow musician Jessica Harp, and produced the Grammy-nominated single "Leave the Pieces". The Wreckers disbanded in 2007 to pursue their respective solo careers. She has had several commercially successful songs, most notably winning a Grammy with Santana for "The Game of Love". After the release of West Coast Time stalled for unrevealed reasons, Branch changed record companies and eventually released Hopeless Romantic instead in 2017. In 2022, she would follo up with her next album, The Trouble With Fever.