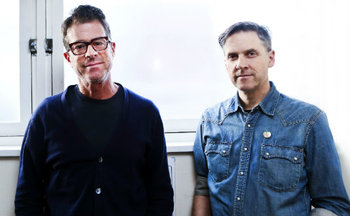 Calexico is a band from Tuscon, Arizona. They're named for a real-life city on the California-Mexico border, and the cross-cultural mish-mash implied by that name is exactly what their music sounds like: a mix of Latin and North American musical idioms, drawing from mariachi, conjunto, cumbia, Tejano, country, rock, Post-Rock, Surf Rock, and Jazz. (Usually, people lump them in with either alt-country or Alternative Rock.)

The band's origins go back to 1990, when founding members Joey Burns and John Convertino met. Convertino was playing drums for Giant Sand, and Burns was studying music (and would subsequently join Giant Sand's rhythm section himself). In 1994, they decided to start a band on the side—Friends of Dean Martinez, a westerny-lounge collaboration with Bill Elm (of Naked Prey). Then in 1996, Burns and Convertino parted ways with Elm and began recording by themselves, first under the name Spoke, then renaming themselves Calexico.