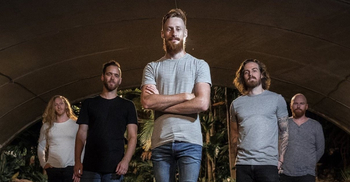 Caligula's Horse is an Australian Progressive Metal band from Brisbane, Queensland. They were formed in 2011 by lead guitarist and songwriter Sam Vallen and lead singer Jim Grey, who to this day are the primary core of the band. The project was initially a one-off collaboration, but positive response to their debut album Moments From Ephemeral City led them to continue producing records. After releasing a follow-up EP, titled Colossus* The EP's two songs would later be appended to Moments From Ephemeral City upon rereleases., later that year, they produced a full-on Concept Album, The Tide, The Thief, and River's End, in 2013. After signing with InsideOut Records (a progressive metal-focused label), they released their first major commercial success, 2015's Bloom, and then another, somewhat different concept record in 2017's In Contact, while steadily gaining further worldwide recognition and expanding tours. In March 2020 they announced their fifth album, titled Rise Radiant, to be released in May of that year.

Their style within progressive metal has been, as is to be expected, compared to contemporary projects such as Dream Theater, Opeth, and Haken, as well as their fellow Australians Karnivool, and Grey's vocals often get compared to a cleaner Maynard James Keenan, but they occupy a unique niche within the genre. Vallen has, on various occasions, mentioned Steely Dan, Frank Zappa, and Jeff Buckley as inspirations for his compositions.

Past band members include:

How could this all last when we trope so brightly?: