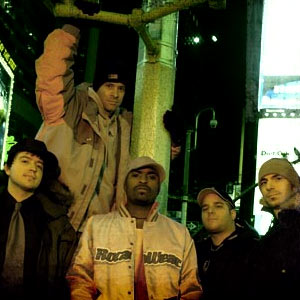 Candiria is a Progressive Rap Metal band hailing from Brooklyn, New York. They're best known for blending elements of Progressive Rock, Hardcore Punk, Heavy Metal, Hip-Hop, and Jazz Fusion into a distinctive style they like to refer to as "urban fusion". While driving on the way to a gig in Cleveland to support their new album during September 2002, Candiria's equipment trailer was hit by a semi-truck, sending it and the van the band was driving flipping several times down the road. Miraculously, the entire band survived the ordeal and even made a picture of the demolished van the album cover for 2004's What Doesn't Kill You....