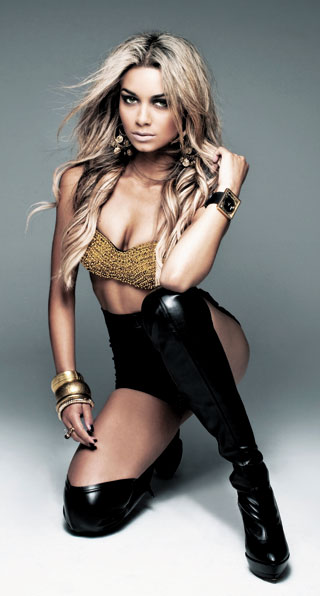 Running the night. And possibly the daytime too.
Advertisement:

Havana Brown (born Angelique Meunier, 14 February 1985) is an Australian Synth-Pop singer and dancer of Mauritian background. She began her professional career as a DJ after a short stint in the UK Girl Group "Fishbowl" (who broke up before they could release their first single). She started DJing in Melbourne nightclubs before being approached by Island Records Australia to provide mixes for a compilation album. This later became the highly successful Crave series, with all of its seven volumes peaking inside the ARIA top 10 and two of those volumes attaining Gold status. In December 2009 Brown became the Austereo network's resident DJ, mixing on the radio show Party People.

In 2011 Brown made the transition to being a pop singer, releasing her single "We Run the Night" to top 5 peaks in Australia (where it went three times platinum) and New Zealand (where it went platinum). Though Brown released a follow-up single, "Get It", soon afterwards, it wasn't as successful as "We Run the Night", barely peaking inside the ARIA top 40. Instead of following through with "Get It"'s promotion overseas, Brown enlisted the help of US producer RedOne (best known for his work with pretty much every single popstar post-Lady Gaga) and rapper Pitbull for a remix of "We Run the Night". This version of the song had an alternate video, and it reached #1 on the US Billboard Hot Dance Club Songs and #21 on the US Billboard Pop Songs. It also charted in other territories such as Canada, Norway, France and Belgium.

Brown represented Australia in the TV Song Festival for the Asia-Pacific Broadcasting Union (ABU) in 2012.

Brown has, as a DJ, supported the Pussycat Dolls and Britney Spears and, as a singer, supported Chris Brown. She also cites Janet Jackson as her major influence.

She released an EP entitled When the Lights Go Out in July 2012 and has released Flashing Lights (IN AUSTRALIA AND NEW ZEALAND ONLY!!!!) in 2013.

Discography as a Performer: