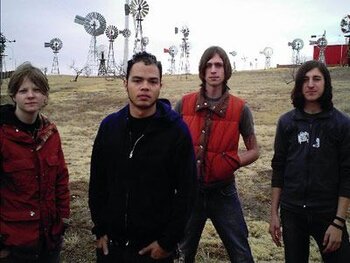 Confusion at its finest.
"As the roots undo
And the branch becomes..."
—"Interview at the Ruins"
Advertisement:

Circle Takes the Square is a Mind Screw Post-Hardcore/Screamo band formed in 2000, in Savannah, Georgia. They are often praised for their unique blend of Progressive Rock, screamo, grindcore, sludge metal, Post-Rock, and Emo Music. They have released a total of two albums in their run, a split with fellow screamo oddballs pg.99, and a self-titled EP, which have attracted substantial critical acclaim and have been extremely influential in their (many) genres.

Please be aware that if you read their lyrics, your mind will definitely be in its own state of hell.