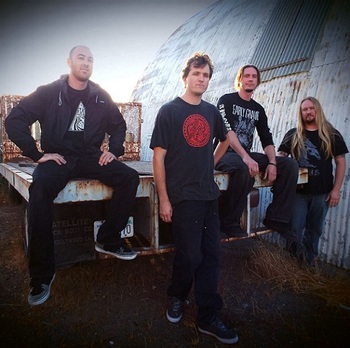 Current line-up. Left to right: Brennan Kunkel, Nick Cohon, Marcus Luscombe, Matt Solis.
Mists once dressed these dunes
Like silk upon her skin,
But the ocean's bare today
And the tide is coming in.
— "The Emigrant's Wake", from Metazoa
Advertisement:

Cormorant is a Bay Area Progressive Metal band formed in 2007 that incorporates several other genres into their music who are noted for being musically independent and for their poetic lyrics. The band was founded by Arthur von Nagel and Brennan Kunkel, who grew disinterested with being in a Thrash Metal group as they felt that their sound was too limited. With guitarist Nick Cohon, they formed Cormorant in 2007 as a trio, releasing a demo and an EP. When Matt Solis joined the band after meeting at an Enslaved show, they dove into writing and recording their debut album, Metazoa, with legendary producer Billy Anderson.

The album was met with positive reception, and the band was awarded “Unsigned Talent of the Year” by readers of Ultimate Guitar and a string of successful live shows. In 2011, they began working on a follow up which would later be known as Dwellings. After it’s release, it found even more praise and recognition than their previous album did, being included in multiple end of year favorites list and recognized by NPR, Yahoo! Music and The Needle Drop among others.

During a national tour in 2012, Arthur felt particularly homesick. Later that year, he left the band on good terms to pursue his career in video games with Tell Tale Games. He can still be found supporting the band, following their updates and being present at live shows. The rest of Cormorant responded to his departure with enthusiasm as means to further evolving their sound with new members, as they had when Matt first joined the group. After searching for a replacement, they found Marcus Luscombe who took over being bassist and lead vocalist, and co-wrote the lyrics to their latest album alongside Solis.

Their Bandcamp profile can be found here

Their lyrics contain tropes of: