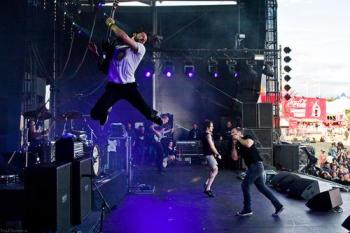 Flying guitarists are a lot more common in this line of work than you might think.
Related Acts:
Advertisement:

The Dillinger Escape Plan was a Metalcore band from New Jersey. They formed in 1997 after the split-up of Arcane, a fairly run-of-the-mill hardcore band that guitarist Ben Weinman, drummer Chris Pennie and singer Dmitri Minakakis played in. Building on the sound of bands like Converge, Cave In and Botch, they initially developed a technically demanding mathcore style based on speedy tempos, shouted/screamed vocals, and purposefully jarring shifts in rhythm and tone. Following the release of their first album, their music started to become even more experimental, incorporating clean vocals, industrial and electronic textures, and a greater interest in melody and structure.

Despite what the above description might suggest and their being arguably one of the most extreme bands in the world, they maintain a decidedly lighthearted approach to their music (especially in a genre known for po-faced-ness) and their songs are much more quirky and eccentric than might be expected. The band has had numerous lineup changes, to the point that, at the time they split up, lead guitarist Ben Weinman was the sole remaining founding member.

In mid-2016, the band announced that it would be going on an extended hiatus after the release of Dissociation; however, Greg has gone on to say that the band is actually breaking up

, in part due to he and Ben feeling that they've done all they can do from an artistic standpoint.

On December 29, 2017, the band played their final show at Terminal 5 in New York City with Code Orange and Daughters as supporting acts. Today, The Dillinger Escape Plan remain a huge influence on Hardcore Punk and Heavy Metal with their discography having received critical acclaim, most notably their debut Calculating Infinity. Following that, Greg Puciato formed a Synthwave project called The Black Queen with the help of former Dillinger sound engineer Steven Alexander and ex-Nine Inch Nails guitarist Joshua Eustis.

The final line-up consists of:

Studio albums and other releases: