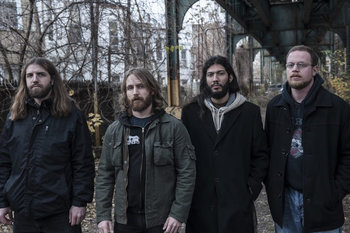 Pyrrhon is an avant-garde Death Metal band from Brooklyn. They play a highly chaotic, technical, and dissonant form of death metal, comparable to Gorguts and Ulcerate but with an approach more influenced by grindcore and Math Rock. They are also notable for vocalist Doug Moore's highly poetic and misanthropic lyrics, which are mostly extremely cynical and incisive explorations of philosophy and social issues. The band has so far released four full-length albums and three EPs, all to increasing critical acclaim.

"O, rejoice!
For soon the world will burst with wombs
The sun will claw for the trees in vain
And an ocean of bones will creak below"