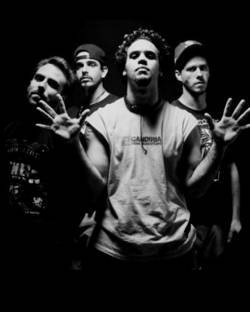 The original fusion from the island Borinquen.
Influences:
Related Acts:
Puya is a Puerto Rican Jazz Progressive Metal Salsa band. Their music usually involves a blend of several different styles at once or a Genre Roulette shifting from different types of music. They would be best described as a jazz fusion or "metal jazz" band, but are usually called "Progressive Metal" because "jazz metal" really isn't a thing.
Advertisement:

1. Drawing from more palpitatable, accessible, less extreme metal genres (their sound has incorporated elements of Thrash Metal and Groove Metal) and prominently using elements of Latin Jazz and Salsa, either predominately, or fused with metal.

2. Shifting into other styles. Their songs have had occasional rapped vocals, the band has dabbled in Funk Metal and a lot of their songs are straight up in Latin styles like Latin Jazz, Salsa, Cuban rumba, bomba, and so forth (at least one track, "Semilla", is a Progressive Rock instrumental).

Though before they were a metal band with vocals, they started off as a instrumental Prog Rock combo named Whisker Biscuit influenced by bands like Rush. With their shift to a Metal/Salsa/Jazz band, however, Puya added a backup horn section and percussionists, giving their live shows a large cast of musicians rivaling Trans-Siberian Orchestra, although, officially, the band only has three musicians and a singer. Vocalist Sergio Curbelo performed on Puya's 1995 album, but was not officially a member of the band until 1996, thusly the "band" from 1991 until 1995 only consisted of two members—guitarist Ramon Ortiz and composer/bassist Harold Hopkins Miranda, the band's founder and leader.

Their first, self-titled album was released independently in 1995 by the Miami, Florida indie record label Noiz Boiz Records, and then they had a couple of albums on the major label MCA before being dropped due to lackadaisical sales; despite tours with mainstream metal bands, Puya failed to attract much interest due to their jazz fusion style not being widely received by metal fans and initial mixed to negative critical reviews and then broke up for several years. During that time, Puya went on to become very well noted and respected by Progressive Metal musicians, and had some influence on jazz-metal fusions. So, in 2010, they reunited releasing a new EP with some new songs and an outtake from their third album, and successfully crowdfunded a live album in 2014. They haven't put out any new releases since then, but have been actively touring.

Ramon Ortiz has released several solo albums, described musically as being a cross between Dream Theater and Ill Nino. Ortiz also fronts a band called Ankla, which plays a mixture of Thrash, Metalcore and Death Metal.

Puya has maintained the same line-up for over 20 years:

Their backup fluctuates, however, and the albums feature session musicians playing the horn and additional percussion instruments.