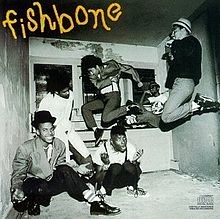 "Party at ground zero
A "B" Movie starring you
And the world will turn to glowing
Pink vapor stew"
— Fishbone, "Party At Ground Zero"
"Fishbone is a group of brothers that play that heavy metal music. It's the stuff that you see on MTV and turn from."
—Damon Wayans

Fishbone are an African-American Punk-Funk-Reggae-Ska-Rock band from Los Angeles who formed in 1979. They are best known for their songs "Party At Ground Zero," (about World War III) and their cover of Curtis Mayfield's "Freddie's Dead" (from SuperFly).

As usual, the basics about their career can be found at That Other Wiki