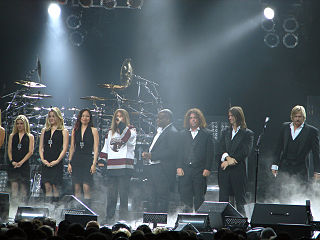 The Trans-Siberian Orchestra is a rock orchestra from New York City conceived by Paul O'Neill in 1996. Their style mixes rock, metal and classical music into a famous sound almost anyone should recognize. All of their albums are rock operas and three of these (five albums in total) are Christmas rock operas. They have a lot of members. In total, there are three composers (four before the death of founder O'Neill in 2017), 20 vocalists, five guitarists, three bassists, two drummers, four keyboardists and three violinists currently playing with them, studio, live (in two touring groups, an East and a West) or otherwise. They have a legendary stage show because of their spectacular light shows, performing abilities and kick ass music. Despite being together for over 20 years, they've only released six albums, as their composers are known perfectionists. They delayed their album Night Castle for three years before it was finally released in October of 2009. While they would release the EP Dreams of Fireflies (On a Christmas Night) in 2012, their next full-length album, Letters From the Labyrinth, would have to wait until mid-November 2015. They also delayed their second stage show, based on their Beethoven's Last Night album, for almost ten years before finally putting it on tour in spring of 2010. The stage show for The Lost Christmas Eve premiered in 2012, eight years after the release of the album.

They are also popular suppliers of music for overly ambitious homemade light shows, especially their song "Wizards in Winter" from their 2004 album The Lost Christmas Eve, as these