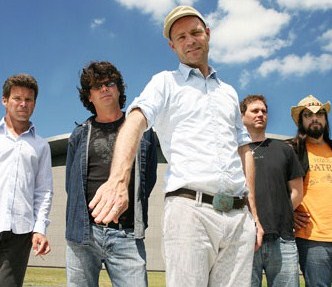 The Tragically Hip, also known as "The Hip."
Advertisement:

The Tragically Hip were an iconic Canadian rock band that formed in 1983. During the 1990s, they became one of the most popular musical acts of any genre in Canada, despite not crossing over anywhere else in the world, and they're about as important and influential on the country's rock music scene as Pearl Jam are in the United States. The band's sound is a mix of alternative rock, folk and country influences, and their lyrics often make reference to Canadian topics and events.

In 2016, lead singer Gord Downie was diagnosed with terminal brain cancer; in the face of his diagnosis, Downie nonetheless played an entire farewell tour to support their album Man Machine Poem, which concluded with a final show in the band's original home of Kingston, Ontario on August 20, 2016 (an event so significant that CBC broadcast it on every one of their platforms, and prime minister Justin Trudeau even attended). Downie died on October 17, 2017, and the band announced

that they were no longer active in July 2018.