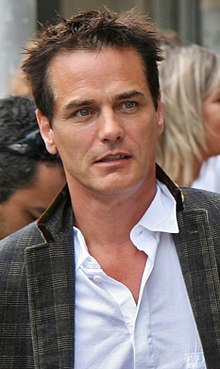 I'm not sure if acting is a fit occupation for an adult.
Advertisement:

Best known for work such as Due South, Wilby Wonderful, Passchendaele, and Slings & Arrows, Paul Gross is a Canadian actor/writer/singer/director/producer. Many of his works feature heavily in the Six Degrees of Due South/Six Degrees of Canada (C6D) fandom — a sprawling fandom that made the transition from print to internet in the 1990s and early 2000s, which uses Due South (and later things such as Wilby Wonderful and Men with Brooms) and its associated actors as a jumping-off point to create something akin to the Jossverse — as he is the primary creator the fandom revolves around.

His first major show was arguably Due South, and after the show failed to be renewed in 1996 and took a one-year hiatus he wound up at the helm of the show as well as being its lead actor. Executive producer, writer, and star, he was the highest paid actor in Canada at the time, but some fans of the show took issue with his decisions as showrunner. The split this hiatus and the resulting changes caused in both the show and the fandom coalesced around the characters of Ray Vecchio and Ray Kowalski and their respective actors as the Ray Wars, one of the most dramatic and influential fandom flame wars on the internet to this day. Ray Vecchio versus Ray Kowalski is still a hot-button topic for some.

He also delights in chewing on the scenery and is a real life Large Ham, as can be seen in this music video

Example of:
Bigger Is Better in Bed