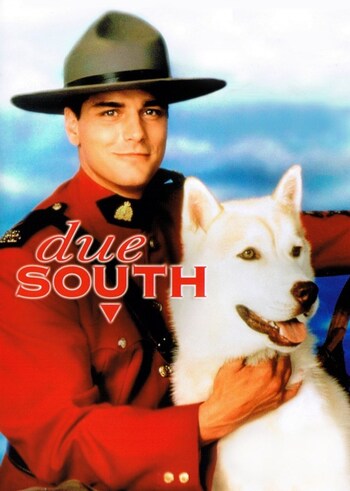 So very pretty.
Moffat: All this do-gooding, Constable. Picking up litter, rescuing kittens, saving people's lives. What sort of message do you suppose that sends to the Americans?
Fraser: That we care, sir?
Moffat: Exactly, and people don't fear people who care.
Fraser: I'm sorry, sir. I wasn't aware that we wanted the Americans to fear us.
— Due South, "An Invitation to Romance"
Advertisement:

A Buddy Cop Show / Odd Couple, where the Odd Couple is an American detective and a Canadian Mountie. The series lasted from April 1994 to March 1999; a total of 67 episodes in four seasons (Canada, where it aired on CTV, and the rest of the world) or three seasons (in the US, where it was seen on CBS), depending on location.

The Mountie, Constable Benton Fraser, came to Chicago on the trail of the killers of his father; and, "for reasons that don't need exploring at this juncture", remained attached as liaison with the Canadian Consulate, working with local detective Ray Vecchio - who, for various reasons having to do with actor availability, is later replaced by Stanley (Raymond) Kowalski. Yes, that is his name (his dad was a fan of Marlon Brando). He even married a woman named Stella, though they had divorced by the time Ray K moved to Chicago.

Cst. Benton Fraser (rhymes with "razor", though Ray V usually pronounces it "Frasier") is the living incarnation of almost every Mountie stereotype ever conceived. He's polite to a fault, can track a man for months across an Arctic waste, fights honorably, doesn't lie, is almost always impeccably clean, even after climbing out of a sewer. During the first two seasons, he's frequently shown wearing civilian clothes, but during the last seasons, he almost always wears the formal red dress uniform, which in real life is only worn for special public occasions or for publicity.

Ray Vecchio is, in his own way, also the quintessential cynical American cop: from his attitudes and his eating habits, to his clothes and his car.

Ray Kowalski is similar in many ways, but more prone to wear his heart on his sleeve, has a unique manner of speaking ("I'm gonna jump Bogart all over you!").

Rounding out the cast is Diefenbaker, Fraser's half-wolf Canine Companion, who is deaf (but can read lips).

Due South is both a buddy cop comedy and a drama and handles both genres quite well. Fraser and both Rays play well off of one another, and make each other's more exaggerated characteristics work.

It also included some elements of magical realism, most notably Sgt. Bob Fraser (usually called "Fraser Sr.", "Dead Bob", or "OFDM" (for "Our Favourite Dead Mountie") by the fandom), the ghost of Fraser's father. Only Fraser could see and hear his father, unless Fraser Sr. wanted to show himself to someone else (this happened three times—he appeared to his killer, to his wife's killer, and to his best friend from the force), or they were also related to him (happened once). Ray V's dad's ghost also popped up once or twice, and interacted with Fraser Sr once, though he was never a regular character.

Recap page and Character page are both under construction.