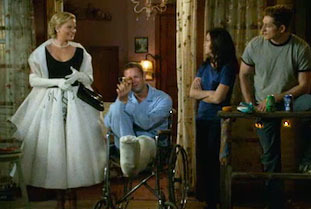 About as blatant as it gets.
Advertisement:

In this homage, the setup is clearly derived from Alfred Hitchcock's film Rear Window to varying degrees. Expect an injured or otherwise hobbled protagonist stuck in their own room conducting a criminal investigation from a fixed vantage point. The injured protagonist — like Jimmy Stewart's Jeff Jeffries — is probably male, while the eager assistant — like Grace Kelly's Lisa Fremont — is far less physically imposing, inexperienced with confrontation, and probably female.

The climax of a Rear Window Homage will almost certainly involve the inexperienced partner getting caught by the suspected criminal in the middle of an attempted Rear Window Investigation. When the canon in question is pure comedy, the suspected crime is often vastly more serious than the real explanation; when the canon is more dramatic than comedic, however, expect to see the injured Rear Window Witness having to engage in a physical altercation despite their injury.

Tropes shared by the Rear Window Homage and Rear Window itself include Window Watcher, The Stakeout, Exploring the Evil Lair, and, of course, Rear Window Witness and Rear Window Investigation. At some point, the protagonist will probably find themselves spouting Cassandra Truth or promising the authorities It Was Here, I Swear! If the investigator isn't an Amateur Sleuth, it's a case of Busman's Holiday. Can be used to provide the plot for a Bottle Episode. Occasionally a show will go out of its way to do an Affectionate Parody.