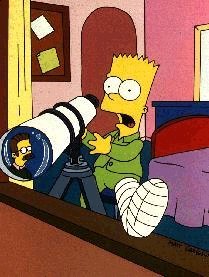 "If that's not Flanders, he's done his homework."
Advertisement:

A summer heatwave hits Springfield, so the Simpsons build a pool to beat the heat. But when a high-dive goes wrong and Bart breaks his leg, he ends up confined to his room, which only gets worse when he believes Ned Flanders has murdered his wife, Maude.

Of note, this is the first episode since season 1 to debut on Sunday night, in a new timeslot (8 PM/7 central), a slot the show has occupied ever since.