Film / Lady in the Lake 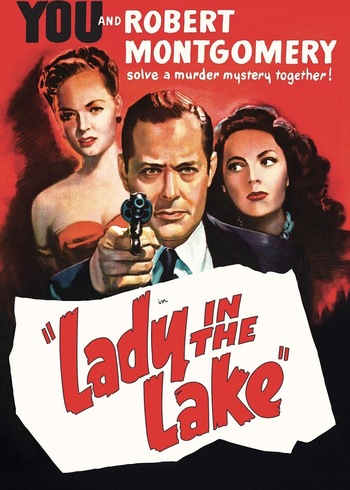 Lady in the Lake is a 1947 Film Noir mystery directed by and starring Robert Montgomery, adapted from Raymond Chandler's Philip Marlowe novel The Lady in the Lake.

Marlowe (Montgomery) is hired by crime-fiction editor Adrienne Fromsett (Audrey Totter) to find Chrystal Kingsby, faithless wife of Adrienne's boss, Derace Kingsby (Leon Ames). Seems Chrystal sent Kingsby a telegram claiming that she was going to Mexico to get a quickie divorce so she could marry her gigolo boyfriend, Chris Lavery. However, Lavery is still in town and says he hasn't seen Chrystal in a month. Chrystal was last seen at Derace Kingsby's estate at Little Fawn Lake, where police have just recovered the dead body of a woman named Muriel Chess, wife of the caretaker. And Muriel knew Chris Lavery... More plot twists follow in classic Raymond Chandler fashion, including Marlowe running afoul of local cops Capt. Kane (Tom Tully) and Lt. DeGarmot (Lloyd Nolan).

Montgomery's official directorial debut,note he'd done some uncredited work behind the camera on They Were Expendable a couple years earlier, after John Ford broke his leg this film is best remembered today for being shot almost entirely in P.O.V. Cam from Marlowe's perspective, with the other characters addressing the camera directly and Montgomery's face only being visible when Marlowe looks in a mirror.