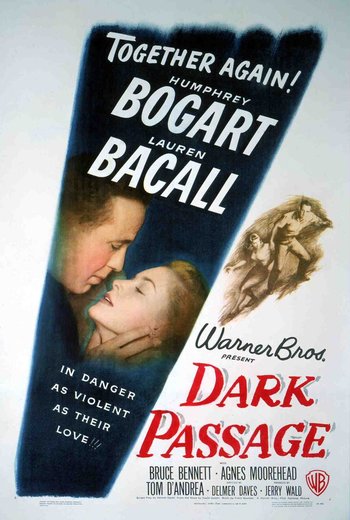 Dark Passage is a 1947 Film Noir directed by Delmer Daves, based on the 1946 novel of the same name by David Goodis.

The plot follows Vincent Parry (Humphrey Bogart), falsely convicted of murdering his wife, as he escapes prison and sets out to clear his name. He is aided in this effort by Irene Jansen (Lauren Bacall), who picks up Parry in her car after his escape and chooses to help him in further endeavors because his case is exactly like her father's... although, unlike Parry, her father died in prison.

In order to avoid being recognized by the police, who have a massive dragnet out for him, Parry changes his facial features with the aid of a plastic surgeon and a friendly cab driver. But when Madge Rapf (Agnes Moorehead), whose testimony sent him to prison and who also knows Irene, comes into the picture, Parry finds his freedom in jeopardy once more.

The original novel was part of a lawsuit involving David Goodis and the creators of The Fugitive, which Goodis alleged to have shamelessly ripped off the plot of his novel. The litigation dragged on for years, finally reaching a settlement after Goodis and his brother (the executor of his estate) were both dead and the case became merely a nuisance suit.