Film / Out of the Past 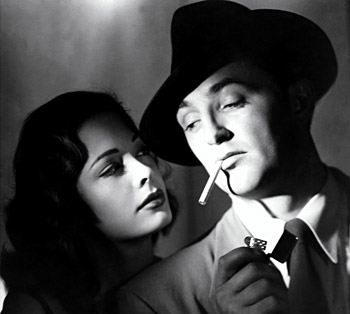 Out of the Past is a 1947 Film Noir directed by Jacques Tourneur and starring Robert Mitchum, Kirk Douglas, and Jane Greer, based on a novel by Daniel Mainwaring.

Mitchum plays Jeff Markham, a private investigator who is hired by bad guy Whit Sterling (Douglas) to find Whit's girlfriend, Kathie Moffat (Greer), who shot him and absconded with $40,000. Jeff finds Kathie but falls in love with her and elects to run away with her rather than send her back to Whit. Jeff's partner, who lost out on the payment when Jeff ran away with Kathie, tracks them down. Eventually, Jeff goes into hiding and Kathie winds up with Whit, but Whit eventually finds Jeff and demands that Jeff do another job for him. Whit wants Jeff to find and retrieve some incriminating documents—but there's a lot more going on.

Out of the Past is considered a classic Film Noir and a career highlight for Mitchum (a Mitchum bio was subtitled "Baby, I Don't Care", a quote taken from this film). Has a place on the National Film Registry.

Random trivia: When this film was remade in 1984 as Against All Oddsnote the film with the hit Phil Collins song "Against All Odds (Take a Look at Me Now)" with Rachel Ward and Jeff Bridges, Jane Greer played the mother of the character she played in this film.