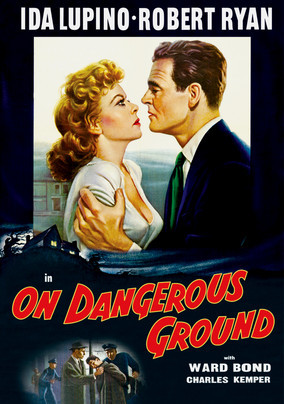 On Dangerous Ground (1952) is a Film Noir directed by Nicholas Ray, based off the book by Gerald Butler, Mad with Much Heart. The musical score was composed by Bernard Herrmann.

A violence-prone city cop, Jim Wilson (Robert Ryan), has punched one too many crooks because of his hate for all the lowlifes in the city. Jim brutalizing suspects on the flimsiest of reasons makes his superior send him upstate to cool off and help catch a murderer. The father of the victim, Walter Brent (Ward Bond), is on the chase to catch the man who killed his daughter and begrudgingly lets Jim help him.

On the haunt for the killer, Jim stumbles upon the house of a blind woman, Mary Marlden (Ida Lupino), and finds himself falling in love with her even though her brother, Danny, is the killer.

The film asks if a hateful, lonely man can be redeemed through love.