Film / The Lady from Shanghai 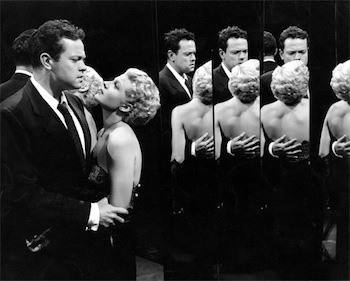 "Some people can smell danger. Not me."
— Michael O'Hara
Advertisement:

The Lady from Shanghai is a 1947 Film Noir directed by, written by, and starring Orson Welles, and co-starring Welles's then-wife, Rita Hayworth. It is based on the novel If I Die Before I Wake by Sherwood King.

Irish sailor Michael O'Hara (Welles) meets the beautiful Elsa Bannister (Hayworth), the titular Lady, after saving her from muggers in Central Park. She offers him a job aboard her yacht, but things soon take a turn for the worse when Michael gets involved in a plot to help a man fake his death.