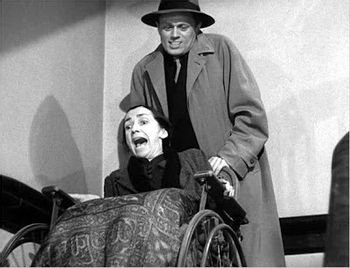 Nick Bianco (Mature) is a small-time hood who can't get a job in the straight world due to his criminal record, and thus is having problems supporting his wife and two small children. So as the movie begins he's returning to a life of crime by robbing a jewelry store in a New York skyscraper. Unfortunately he is shot and wounded at the scene and arrested. Prosecutor Louis D'Angelo (Donlevy) offers Nick a deal if he'll inform on other crooks, but Nick refuses, content with the mob's offer to take care of his wife and kids while he's in the slammer.

Unfortunately Nick finds out while in prison that the mob completely failed to look after his wife and kids, his broke and despairing wife killed herself, and his children have been sent to an orphanage. Bitter at the betrayal and desperate to get his kids back, Nick belatedly accepts D'Angelo's deal and gets paroled. One of the people he informs on is Tommy Udo (Widmark), a seething psychopath of a villain with a very unsettling, giggling laugh. Thus Nick is horrified when he finds out that Udo was acquitted at the murder trial where Nick testified, and consequently is free and bent on revenge.

Loosely remade in 1995 with David Caruso, Samuel L. Jackson, and Nicolas Cage, as part of a short and unsuccessful effort to make Caruso a movie star after he left NYPD Blue.

Not to be confused with the trope Kiss of Death, which is not featured in this movie.