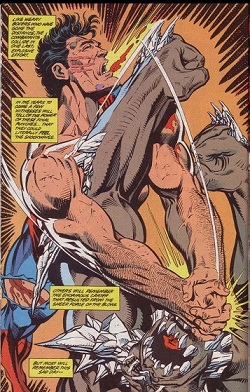 Superman and his opponent both meet their Doomsday...For a while, anyway.
"Now, I don't know who is more metal. The guy who stabbed a man in the face with a three-foot-long sword. Or the guy who was stabbed in the face kept walking forward, and still managed to stab the other guy in the chest with three feet of steel jutting out his skull."
— The Dark Id's Let's Play of Resident Evil
Advertisement:

Two characters commit fatal damage against each other in the same confrontation.

Particularly heart-tugging when it appears the hero has won, it's over... and then they slowly drop to their knees, blood trickling from the side of their mouth. Expect a Big "NO!" from the Neutral Female and plenty of protests that "he'll be fine, we can get him to a doctor."

Can happen as a result of the Single-Stroke Battle, where both swordsmen inflict a mortal blow on each other, but, usually, one dies instantly, while the other has a moment to philosophically reflect on their demise. It also happens with some Western showdowns, where two gunslingers fatally shoot each other at the same time.

This is sometimes Truth in Television, with "ai uchi" (mutual killing – hence the trope name) being a common outcome of samurai duels. Potentially any duel where weapon inertia or lag can compensate for attack lag can have "mutual killing" as a normal outcome. It's not unusual either for one party to lethally wound another, only for them to return the favor very quickly before they die (or for both parties to pretty much strike or shoot each other at basically the same time). Quite a few shoot outs and sword duels ended up as blood baths this way. If you're so "lucky" as to be the better combatant, in this case, it may only mean your lethal wound is slighter and you die a slower and more prolonged death. In stories, this is sometimes used for the "winning" character to talk to loved ones or to have a touching character defining moment.

Compare Double Knockout, where both combatants inflict critical but non-lethal damage on each other. Similar to, though not quite the same as, Taking You with Me, where one combatant orchestrates both of the killing blows. This is a common, albeit far from guaranteed, result of Deliberate Injury Gambit. When it happens during a Mexican Standoff, it's a Blast Out. If damage is fatal but does not prevent immediate retaliation, result may be the same (this includes Time-Delayed Death and Incendiary Exponent). Could also be from a Self-Destructive Charge or Poisoned Weapons. May involve a Last Breath Bullet from one of the combatants.

Yuro scores a double mutual kill in his Tirpitz (World Of Warships).

Yuro scores a double mutual kill in his Tirpitz (World Of Warships).