Literature / The Saga of Grettir the Strong 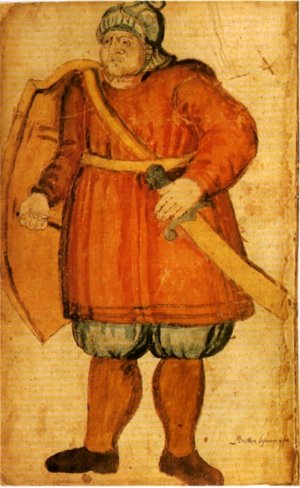 Grettir in a 17th century manuscript.
"I don't care for a monotonous life."
—Grettir Ásmundarson
Advertisement:

Like many sagas, the narrative goes through several generations before introducing its eponymous hero. It starts out with Onund Tree-Foot, a Norwegian viking who tries to combat Harald Finehair's rise to power and loses one of his legs in the struggle. The handicap, however, does not prevent him from further swashbuckling until he ends his days of adventure by settling down on Iceland.

Onund's son Thorgrim and grandson Asmund do their best to live up to their ancestor's format until Asmund's son Grettir steals the spotlight. Grettir is rebellious, bad-tempered, lazy, impatient, disrespectful, antisocial, and exceedingly strong. Predictably, he commits his first manslaughter at the age of sixteen. Sentenced to a three-year exile, he looks for adventure in Norway and earns early fame by vanquishing a haugbui (an undead spirit), an entire band of marauding berserkers, and a dangerous bear.

But ever true to his uncompromising ways, Grettir is soon entangled in blood-feuding and forced to go back to Iceland. Still uninterested in productive civilian work, he decides to take on Glámr, an exceptionally vicious draugr or revenant that has nearly depopulated the district of Vatnsdal. Grettir prevails, but in his last moments Glámr places a curse on him, declaring that Grettir will always be in fear of the dark and be followed by bad luck.

When King Olaf Haraldsson takes over Norway, Grettir again sails abroad, hoping to attain a prestigious position in the king's retinue. But a chain of unfortunate events leads to Grettir being blamed for the death of the two sons of Thorir, an Icelandic chieftain. The accusation of murder shatters his hopes for a career in the king's service, and what's more, back in Iceland, the bereaved Thorir files suit against Grettir. Only on his return to Iceland, Grettir learns that he has been outlawed.

Forced into a life of hiding, Grettir's only chance is to fend for himself in the wilderness of Northern and Western Iceland, supported only by the few people that are kind or bold enough; for sheltering an outlaw is itself a punishable offense. Year after year, Grettir, living mostly by theft and robbery, has to combat not only the forces of nature, but also hired assassins, bounty-hunters, and vengeful farmers, only narrowly escaping death several times. Still he is eager to prove his prodigious strength, ridding the people of Bardardal of two murderous trolls, and avenging his brother Atli who has been killed in a blood feud.

The years on the run take their toll even on a man like Grettir. Yet all is not hopeless, as Grettir's friends obtain the concession that Grettir's sentence will be considered fulfilled if he completes twenty years in outlawry – if only he can survive.

As a public domain work, there are translations online. Here

or as an e-book