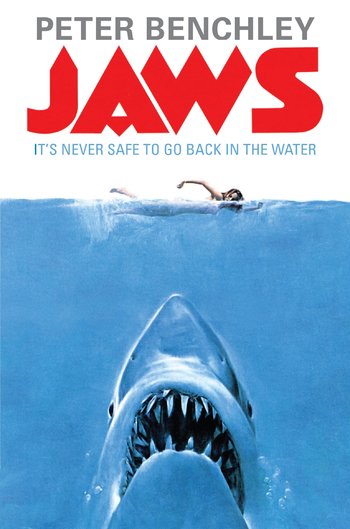 There's nothing in the sea this fish would fear. Other fish run from bigger things. That's their instinct. But this fish doesn't run from anything. He doesn't fear.
Advertisement:

A 1974 horror/thriller novel by Peter Benchley that was adapted into a 1975 film by Steven Spielberg, said film becoming one of the most iconic of all time and single-handedly inventing the Summer Blockbuster in the process.

Amity is a quaint small town on Long Island, New York, frequented by rich city tourists in the summer, from whom the locals derive most of their income, getting them through uneventful winters. When a man-eating great white shark starts killing people in the waters near its beaches, the fragile economy is threatened; police Chief Brody faces the dilemma of keeping the people safe while facing mounting pressure from the town's mayor - and the people who pull the mayor's strings - to keep the beaches open to salvage something of the tourist season.

The book is divided into three acts; the first act is much like the film, opening directly with the shark's first victim, and proceeding from there, albeit with different emphasis. More attention is given to the conflict between Chief Brody's duty to protect the citizens - by closing the beaches, in his opinion - and the town's need for tourist dollars to get through the lean winters, and to Ellen Brody's identity as a "summer person" and her boredom with her blue-collar life.

The second act was almost entirely cut from the film. It deals with Ellen's affair with the younger ichthyologist Hooper and Mayor Vaughn's involvement with sharks of a different kind - mafia loan sharks. It also offers a further reflection on how fragile single-industry small towns are when something disrupts that single industry. The main element from this act to survive the transition to film is the opening of the beaches for the 4th of July, and even that is handled quite differently.

The last act of the book, however, is not so dissimilar, ending with Brody, the rogue fisherman Quint, and Hooper hunting down the shark aboard Quint's boat, though in the book Hooper dies and the shark's death is somewhat less cinematic.