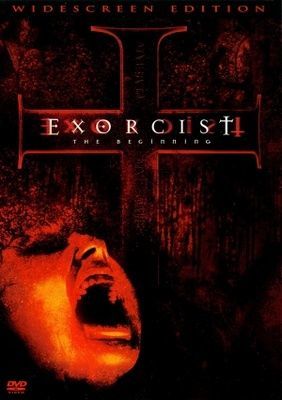 "I was sent here to see if the legend was real."
"What legend?"
"That after the War in Heaven, this is the spot where Lucifer fell."
Advertisement:

Exorcist: The Beginning is a 2004 Religious Horror film. As hinted by the subtitle, it is a Prequel to the 1973 film The Exorcist.

Cairo, Egypt, 1949. A young Father Lankester Merrin (Stellan Skarsgård) has left the Church and become an archeologist, haunted by his experiences in Nazi-occupied Europe during the Second World War. He is then approached by a mysterious collector who hires him to travel to Kenya and steal an ancient relic of a demon from a British archaeological dig... in an ancient church from a time and place where there shouldn't be any. Needless to say, once Merrin reaches his destination, strange events start happening.

This chapter of The Exorcist remains as one of the most bizarre troubled productions in film history. Originally Paul Schrader was brought to direct a psychological horror movie in the vein of the original; he did his job and almost completed what was called Dominion: Prequel to The Exorcist. However, as the movie was being marketed, Morgan Creek Productions decided it was not scary enough to fit expectations, so they tossed the unfinished film to a vault and brought an entirely new director, Renny Harlin, to direct an entirely new movie. This was the final result, a retooling named Exorcist: The Beginning that only shared Skarsgard as the main role and the outlines of its plot. Only after it failed at critics and box office they allowed Schrader to finish and release his film, edging the previous in success and giving birth to the strange event of two films in one.

Dominion: Prequel to the Exorcist