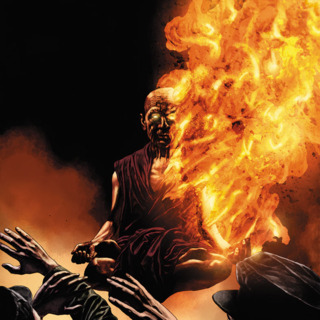 "The flowers bloom, then wither... the stars shine and one day become extinct... This earth, the sun, the galaxies and even the big universe someday will be destroyed... Compared with that the human life is only a blink, just a little time... In that short time, the people are born, laugh, cry, fight, are injured, feel joy, sadness, hate someone, love someone. All in just a moment. And then, are embraced by the eternal sleep called death."
— Virgo Shaka, Saint Seiya
Advertisement:

This trope involves the circumstance where an enlightened being or entity happens to be an antagonist or antagonistic force. The forms of enlightenment can include a form of cosmic clarity, universal meaning, a release of physical tethers, or physical harmony with the world. The character in question happens to have a form of universal knowledge that allows him/her to observe the greater truths of reality but still maintains malevolent qualities.

This type of villain can be viewed as an Anti-Hero, Anti-Villain, Well-Intentioned Extremist, or carrying an Omniscient Morality License if the characters commits to villainy or villainous acts to fulfill a grand purpose that can be seen as beneficial. Such villains will often demonstrate Knight Templar behavior due to being so absorbed by their ideals that they end up causing trouble despite having supposedly beneficial intentions at heart. However in other stories, enlightenment generally has the effect of causing a Heel–Face Turn or at least making a villain Affably Evil in the eyes of others.

On the other hand, such an antagonist is possible in a story with a Villain Protagonist or, at least, a considerably morally flawed protagonist. For instance, if the main character is a greedy capitalist, an arrogant social climber or a transhumanist who seeks to overcome death, he would naturally be antagonistic to someone who is in touch with God and in harmony with the Universe. And the Aesop in such a story may be that the enlightened antagonist was right after all.

In Western culture, the trope largely originates from colonial fiction, and many such characters have a non-Western (Chinese, Japanese, Hindu, Native American, etc.) origin. The reason is that, while "Western" villains are usually depicted as having rejected the moral values of their culture in favor of baser instincts like greed and lust (and, therefore, as more simplistic and unambigously evil), the seeming "villainy" of these characters may be just due to the fact that they come from a foreign culture with a different understanding of the world (based more on spirituality than on science and logic), and, therefore, a different concept of right and wrong. For this reason, they often tend to be depicted more sympathetically, and it may even turn out that their idea of good and evil is closer to the truth than the one of the Western protagonist.

This trope tends to overlap with Light Is Not Good, God Is Evil, Sinister Minister, and Pure Is Not Good due to the mixing of the theme of enlightenment and malevolence. Compare and contrast Hero Antagonist and Politically Correct Villain, which can be considered mundane versions.