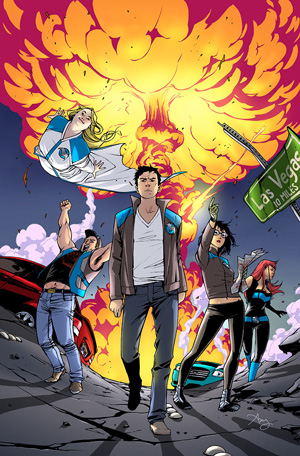 The Renegades, counterclockwise from top-left to right: Zephyr, Torque, Peter, Kris, Flamingo
"What if God could be taught to be a better person?"
— Kris
Advertisement:

Super-powered teenager Peter Stanchek is on a dangerous path. Skipping across the country in a desperate attempt to stay one step ahead of the authorities, Peter quickly realizes that he is a "psiot", possessing the potential to reshape the course of human history. However, Peter’s plight has not gone unnoticed: respected philanthropist and fellow psiot Toyo Harada offers Peter the chance at the things for which the boy has always longed — family, inner peace, self-control — and inducts him into the sprawling, secret network of conspiracy and subversion known as the Harbinger Foundation. His first lesson? All power comes with a price.

Originally a series in the 90s by Valiant Comics, Harbinger received a new rebooted series is 2012, written by Joshua Dysart. It lasted for 25 issues, concluding in 2014. It was followed by the miniseries Harbinger: Omegas, which explored Peter and Harada following their final confrontation, before getting a Stealth Sequel in Imperium, which shifted focus to Harada and his more active efforts with the Foundation. In 2016, Peter and the Renegades once again regained the spotlight in Harbinger: Renegades, this time helmed by Rafer Roberts and Darick Robertson.

It has also received two spin-offs: FAITH and Generation Zero.

Unrelated to the 2003 sci-fi RPG, or to the Mass Effect fanfic.

Tropes associated with the relaunched Harbinger include: